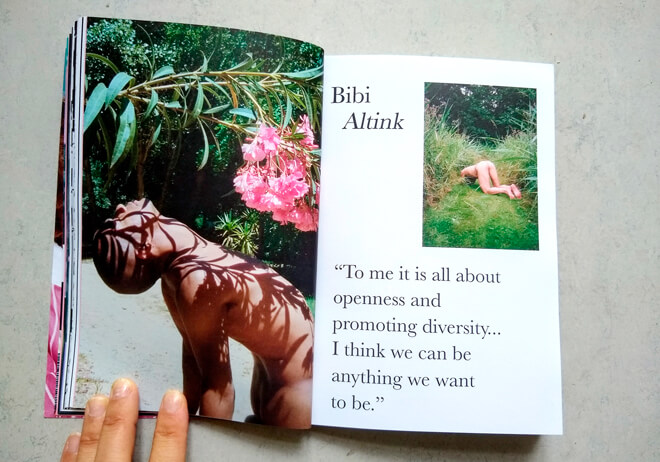 In june I had an interview in the Twin issue of Brenda Magazine about my project LOOK AT ME. You can read the interview here.

What does ‘Twin’ mean to you?

The word ‘twin’ immediately makes you think of look-alikes. Two relatives who are born on the same day to the same mother. But if you approach the word more abstractly, you could think of twin as ‘one of two very similar things’. So it can also relate to concepts like equality, similarity, diversity. In this case, the word ‘twin’ raises many questions. How do we differ from each other and how do we resemble each other? This is a question that I deal with in my photography as well.

How do these photographs relate to ‘Twin’?

We tend to focus on differences, but men and women are actually not that different. This project originated because I wondered why I see so few nude men in our visual culture. When I started photographing nude men, I got interested in this concept of attributing characteristics to gender. Men are often depicted according to a masculine ideal: active, dominant and muscular. I wanted to show that a nude man, just like a nude woman, can be soft, sensual, sexual and emotional too, without ‘losing’ their masculinity.​

Why do you feel it’s important to subvert the male gaze?

I don’t know if I would say ‘subvert’, but what is important to realise is that for a long time, art was dominated by men. Men were looking at women, men were the creators and had the active role. The female gaze is still underrepresented. I find it important that there are different perspectives. Men can also be looked at and women can also be the active creators. There is still a world to discover.

What are your thoughts on gender?

I see gender as a fluid concept, which means to me you can’t actually say that a certain trait is male or female. It makes me feel like I can only be one of both. Why is a man feminine when he shows his emotions? The other way around, I have been called masculine when I show brave behaviour. These gender stereotypes are very persistent. My project is a proof of that. People looking at my photos have to get used to the role of the man as a nude model and and to see their emotional, sensitive and sexual side.

How could we as a society tackle issues of gender?

By showing different perspectives and talking about what gender means to us. I think art is a way to show these different perspectives. I get really excited by all these artists showing their own view on gender. However, I think you can only tackle this problem by working at different levels. So the personal, societal and political level. To me it is all about openness and promoting diversity. We must be wary of rashly pigeonholing people. I think we can be anything we want to be.

What it means to stare at sun glitter

How an artwork changed my life

Christina A. West: looking at a naked man

Why we should free the penis from shame